My bet is you’re definitely using Apps made with Flutter on a regular basis. Whether shopping on Amazon or Alibaba, pay bills on Google pay or entertain yourself on Hamilton, you should have experienced the smooth functioning of Flutter.
Today, there are roughly over 14 thousand Flutter Apps and has over 6 billion downloads. Since Flutter was launched in 2015, its fame and demand keep on increasing due to its efficiency, excellent performance, faster time to market, and much more attractive features.
Based on the Stack Overflow report, 68.8% of developers who previously used Flutter, have expressed their satisfaction. Also, they showed interest to adopt Flutter in their next projects. 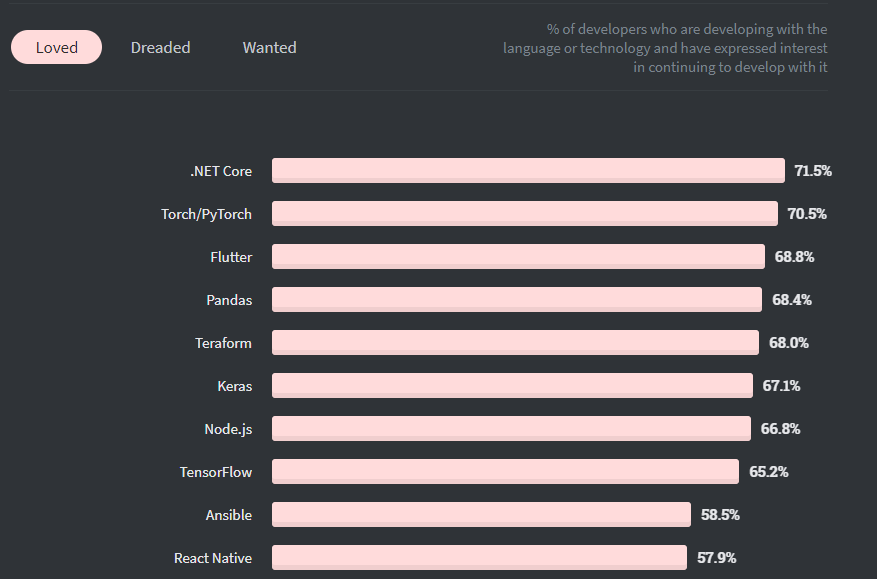 And, according to the latest news (22nd Apr 2021) of venturebeat.com, Google announced that Flutter is constantly adopted by “nearly half a million developers” every month.

Flutter is Google’s software development toolkit that assists in building beautiful Apps with a native feel. It is an open-source technology that can create mobile, desktop, and Web Apps with a single codebase.
What makes Flutter so unique is it is an SDK. Unlike other software solutions, Flutter is not actually a framework or a library. Let me explain it briefly so that it brings better sense.
A library is utilized to perform a particular function while developing an application. In other words, it is a reusable piece of code. However, a framework acts as a skeleton architecture to build software or an App. Plus, it forms a good foundation for your App and is equipped with sets of tools enabling you to bring out the desired functionality.
Whereas an SDK is a complete collection of multiple tools, libraries, documentation, APIs, etc. So, it offers everything you need to build a full-functioning cross-platform App.

Flutter is a strong development framework, in fact, I would say it is an effective hybrid version that contains all the elements from cross-platform and native development models. Let us see some surprising facts about Flutter that probably you never heard before.

Backed by a Giant Tech Firm

Since Flutter is backed by the tech giant – Google, you can expect regular updates and the introduction of innovative tools and components. For instance, the second generation of Flutter was released in March 2021 with some awesome upgrades and improvements. Now, Flutter is more refined and provides developers a better experience.
Moreover, you can expect constant support and any existing bugs will be fixed promptly. For years Google has been working on a huge project – Google Fuchsia. Fuchsia UI and Apps use flutter to run on multiple platforms and ensure great performance. This makes me think that Google has some great plans for Flutter.

One of the annoying things developers face during developing an App is encountering an error while running a program. Again, going back to regular programming from the beginning consumes extra time and effort. But luckily, Flutter’s architecture is equipped with a hot reload tool that doesn’t require any plugins.
Additionally, it allows viewing updates in real-time. So, a developer can fix it in an instant and continue working where he/she left off, eliminating the need to restart from the start and supports experimentation without long delays. This feature, therefore, increases development productivity and provides excellent developer-designer cooperation as a designer can work with a developer to experiment with an App’s look and check the effects on the spot.
Furthermore, the developer can comfortably finish the initial installation process in less than 30 minutes and have a working development environment set up.

As I have already mentioned, Flutter enjoys a great set of widgets. This gives us one big advantage; those widgets are constructed in a way that perfectly follows Android’s Material Design and Apple’s Cupertino looks.
Hence, the task of creating user interference takes surprisingly limited time.
Another amazing fact is these building blocks facilitate more solid creation of UI, unlike other approaches that include different objects (layouts, views, controllers). Plus, the architecture is based on reactive programming. We can conclude that Flutter has a powerful and unified object.

Supreme Performance and Perfect for MVP

Apps built with Flutter offer good performance due to its direct code compilation system. This is because it discharges any bridges that usually decreases the App’s performance. Also, this framework assures a steady 60 fps and even 120 fps for devices with an option of 120Hz updates. This improves displaying a smooth picture.
Choosing Flutter will be an ideal choice for you if you need a Minimum Viable Product on a tight deadline. This will be especially valuable to a start-up where they need to present an impressive App to their investors.

Flutter uses a simple yet efficient programming language i.e., Dart. It is a modern object-oriented language that can be easily understood by JavaScript and Java developers. So, there’s no need to spend extra time learning this language. Dart has wonderful portability and compilation capabilities.
Additionally, Dart syntax has easy-to-follow documentation and supports both strong and weak typing styles. Hence, even a novice developer can work well using Dart with some practice. 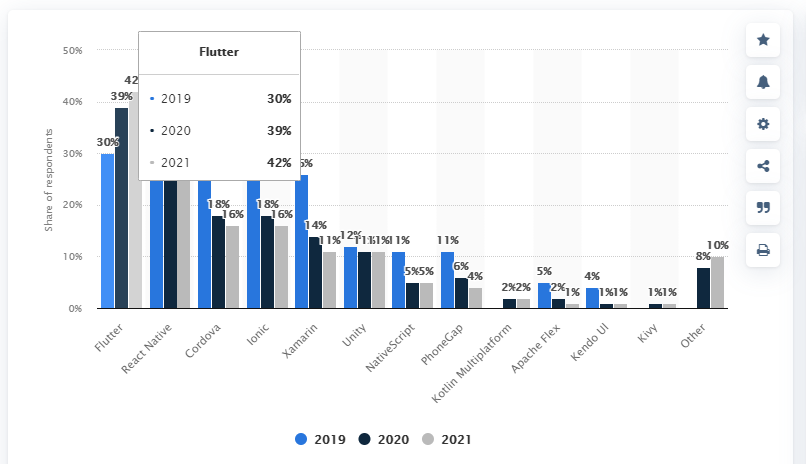 Based on this 2021 developer survey, it’s pretty clear that Flutter is the only framework that saw rapid growth last year. Besides, 39% of the developers used Flutter in 2020. This indicates that Flutter’s growth will be unstoppable in 2021.

You would have already aware of this feature. Still, let me give a brief description. With Flutter, you can employ one codebase to run your App on multiple platforms say Android and iOS. Developing an App for both Android and iOS platform is always better than developing for a single platform.
This gives you the power to target more customers. Since Flutter doesn’t depend on the platform, this is possible. Moreover, the development process requires less testing meaning quality assurance tasks is made more streamlined. Moreover, it renders an automated testing toolset for three types of tests, i.e., unit test, widget test, and integration test. This allows a developer to make the development even more smooth and can detect bugs or any other issues quickly.

After releasing Flutter 2, the framework transformed from mobile-focused to more portable and platform-agnostic. Currently, Flutter Apps can be deployed in Android, iOS, Linux, macOS, and Windows. Additionally, Google has been working to cover other operating systems like cars, TVs, IoT, and other smart home appliances. This will bring a new level of possibilities for businesses.
If you are looking to run your App in different languages and diverse geographical locations, the code should be ready for localized content. This is known as internationalization. But this workload is reduced due to the helpful widgets. Besides, the Dart intl package supports 78 languages as well as a wide variety of currencies, units of measure, dates, etc.
If you are eager to know more comprehensive benefits of Flutter, check out this article – Benefits of Using Flutter For Your Next Software Development Project.

Flutter vs Other Frameworks

The app industry offers us a great many cross-platform frameworks. Right now, I would say there are two popular cross-platform frameworks excluding Flutter which are Xamarin and React Native.
Xamarin is a decent framework that can be utilized to develop awesome Apps, I agree. Yet, it’s not so convenient to work with based on my opinion. Moreover, it provides somewhat less in terms of productivity, compiling time and its UI development is time-consuming.
This leads us to lean towards the leading two market players, Flutter and React Native.
React Native is recognized as one of the best cross-platform frameworks, many would admit that, including me. Nevertheless, it heavily relies on OEM components which are not in the case of Flutter, thanks to its widget-based development.
Comparison between Flutter, React Native, and Xamarin on the interest shown by people worldwide, 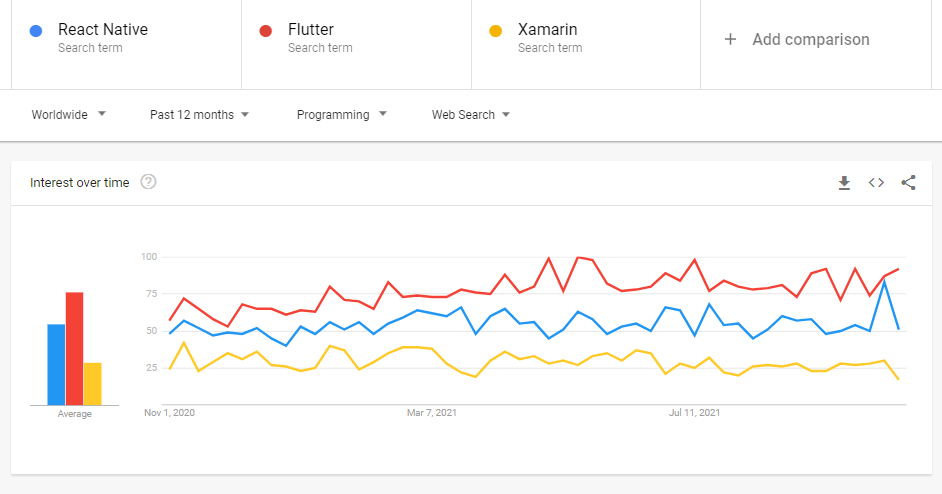 Flutter and React Native is backed by leading tech giants i.e., Google and Facebook respectively. I guess the war between Flutter and React Native most probably will not end. Each has its own sets of advantages and unique features. Plus, both enjoy strong community support. Both are based on the C-style syntax and fundamentally similar in terms of design. Further, both follow object-orientated principles.
However, if your business demands an App with good performance and native appearance Flutter will be an ideal choice. But if you crave better adaptive components, then React Native is the best fit.

We can only conclude which will be better suited to your business requirements and characteristics. In case you require the ultimate comparison between Flutter and React Native, click here. Hence, before analyzing your business strategy, strengths, unique selling point, and all other factors, it’s quite difficult to choose one framework. But I would say Flutter is overtaking React Native as we speak.

Flutter seizes a top position when it comes to cross-platform App development. Although Flutter is comparatively new to the market, its remarkable speed of advancement and introduction of attractive new features paves the way for its outstanding reputation. Furthermore, its growth with regards to market presence and features front is exceptional.
I suppose you don’t have any doubt whether opting for Flutter will be a good choice provided it fits the parameters of your App. 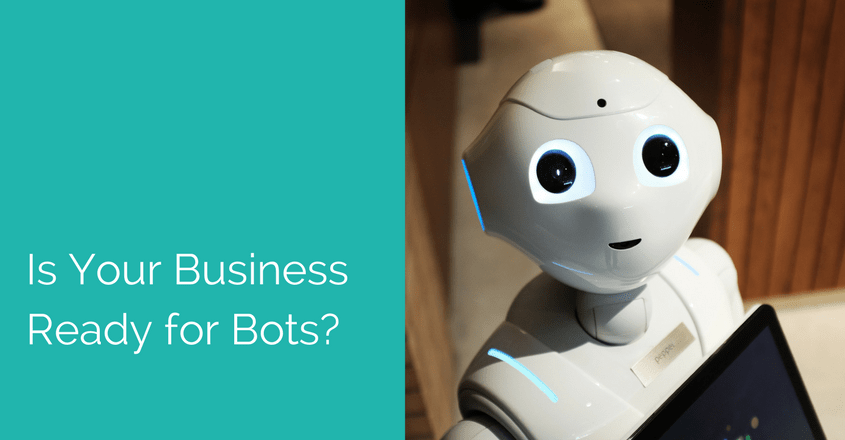